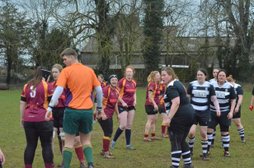 Top of the table clash!

Sunday 18th February hosted a historic day at Towcestrians RFC. It saw both the Ladies and the Girls teams playing fixtures simultaneously at home for the first time ever.

Towcester Roses hosted top of the table team Royston Ladies, a team they’d played twice before, but who they knew had grown in size and had improved immensely.

Towcester Roses took just 10 mins to score their first try. With a great break through the centre of the Royston defence by Sarah (Rambo) Davey, she scored under the posts. A first start in the XV for Rambo, Towcester’s new signing! Kelly Harry stepped up to the kick, giving Tows the 7-0 lead they deserved.

Showing great depth and ball handling, the Tows ladies pressed hard in attack throughout the whole game. Using forwards and backs plays, keeping the ball moving. Royston tackled well, but Tows were quick to secure the ball at the ruck.

Showing great strength, Rambo ran from the half way line evading the Royston defence, to score her second try of the game! Tows lead 12-0.

Olivia Burnett made her debut for the Roses, coming on for Dev Wesson, who came off injured from a high tackle. Olivia stepped up to fly-half, her chance to lead from the go alongside Josie Murray doing a fantastic job throughout at scrum half. This pushed the back line out, with Kelly and Gemma Smith to be the formidable force in the centre.

It didn’t take long for the 9-10-12-13 combination to flow, getting Gemma the ball for the Roses’ third try of the match! Kelly doing her thing and putting the ball over the posts to extend the lead to 19-0!

Olivia Snook came on to replace Rambo. The ‘finisher’ Olivia, put some fearless tackles in!

In the second half of the game, Royston forced the Roses back and pushed them to defend well. Shelley Davey came off with a kick to the ribs, bringing Milly Lee on for just her second outing in the forwards at Towcester. Royston shifted the ball well out wide and made the Roses’ wingers and full back take charge getting them into touch. A bit of friendly fire saw Siobhan Taylor clash heads with her teammate, a well earned rest was in order, after she had a great game, stealing back the ball and making endless tackles, so she was replaced by Fay Tennent.

Full back, Sam Phillips had a fantastic game. With Royston making line breaks out wide and often kicking to make ground, Sam took ball in hand and ran the ball back at the Royston defence. Compared to Mike Brown by Captain Amy Lovell, Sam showed her skills at spotting holes in the defensive line, going on to score a fantastic try, to get the lead up to 24-0!

Unfortunately Royston had their 10 taken off due to injury, so play stopped for a short while.

The score did not reflect the game. And Royston gave it their all from start to finish.