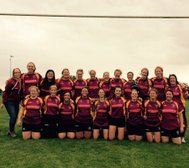 With the Roses travelling to Peterborough, not knowing the standard they were to face, it was expected that nerves would be present. However Towcester came out of the blocks firing. The pace of the game a lot quicker than what they'd played before meant their line speed needed to be good and their tackling and rucking efficient.
In this first 15 min quarter Rosie Haigh carried hard down the left side, creating space for Sam to get over the line. Too quick for their backs and a try that came out of no where.

The middle two 15 mins were all about our defensive line. We had to make tackles and secure rucks, but unfortunately with a powerful forward from the Borough bounding to the line, Tows couldn't do enough to hold them up and the score equalled 5-5.

Tows put in a tremendous amount of effort. With kicks out of our 22 to push them back. As well as driving mauls that Towcester winning almost all!

In the far corner with the backs raring to go, our wingers were set to score. But some good line speeds from P'boro meant our centres couldn't get the ball out to the wings. Ball turned over, it appeared as if the chance of scoring with only 5 mins to go looked ominous.

Yet, with a lineout in Tows' favour after it not going 5m, a free kick which Rosie took in hand meant a strive to the line was In order. Making lots of ground and battling through Rosie could pop the ball to Grace supporting her and with a one hand lunge, 5 points were on the board! Converted right under the posts and time up, TOWS WON!

Brilliant kicking and distribution from the 9 Josie Murray and 10 Kelly Harry resulted in Kelly with back of the match and Rosie with fantastic handling and strong ball carrying and rucking she got forward of the match!