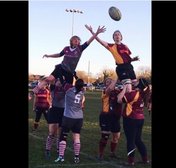 Cup win for the ruthless Roses!

Towcester Roses progressed to the quarter finals of the Junior Cup with an hard fought win over West Norfolk.

With a small squad and everyone feeling the effects of too many mince pies, it was a physical, rough game, where the team pulled together amazingly to play some of the best rugby we have played all season.

The forward pack destroyed the opposition in scrums and had efficient line outs, they worked well securing the ball and getting it moving and out to the backs who played brilliantly running hard lines and managed to score 8 tries between them.

The Tows team pulled together when our captain Amy Lovell was whisked to hospital with a suspected broken leg, it showed our amazing team spirit as nothing would have stopped us winning the game for her.

Amy was plastered up with a fracture and back for the pints in the clubhouse and will be playing again before the season is over!

Final score 44-5 which feels misleading as it was a very tough game against good well drilled opposition.

Captain’s Player of the Match was an easy pick! With Rosie Haigh playing out of her skin and being the fantastic role model she’s always been!