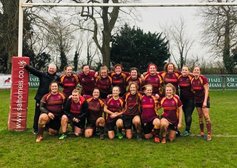 Trip for a battle

First game of the new season

With a long drive, Tows prepared for a tough game against a team they’d never met in Tewkesbury. This year in a higher league and with a diminished squad and with just 12 players for their first Sunday outing they took to the road as a team unsure of how their first match would pan out.
Laura Vickery proudly led the team out at Capt today.
With a score line not reflecting the game, the Tows ladies took it in their stride and gave 110% from start to finish.
With Bex Beezhold making her debut for Tows on the wing, she wore her number with pride and put in some great tackles and made some great runs. Lucia Graziano was a fantastic added element to the forward pack, a new fresh pair of legs for the squad.
The ladies put in some great tackles and when in attack they kept hold of the ball well, made ground and fought hard to get over that try line!
Having to drop to just 10, with a few knocks to Millie Lee who played out of her skin and Laura Wychell who was a new face to the backs.
Olivia Burnett dictated the game at fly half and ran moves alongside Amy Lovell at 12 making ground and creating plays. With the Tewkesbury 12 running hard lines, it made the backline work hard! Olivia Snook joining the backs as a well appreciate pair of legs.
The forwards and backs gave their all and were just unfortunate to not get a score. Scrums and lineouts worked well with the likes of Steph Eaton and Laura Cave giving their all and forcing Tewkesbury mistakes, with Maddie Warren doing a great job at scrum half like a terrier defending her ball.
Olivia Burnett got the overall player of the match from the Tewkesbury Team as well as back of the match from the coaches. Emma Russell was a well deserved Forward of the match, with smashing tackles and a dominate defender today.
Spirits remained high throughout the whole game. Even when the score line was out of reach for Tows they did what they always do and wear their shirt with pride and do it for one another.
Share via
FacebookTwitter
https://www.pitchero.com/clubs
Recent news