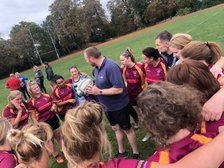 Home win for the Roses!

The Roses faced HQ Harlequins in their first outing at home in the 2018/19 season.
With new ladies on the team sheet & people playing out of position, the game was going to be a challenge for all involved. Deb McNamara, Heidi Aris and Sam Smith putting on a Tows shirt and making a huge difference to the game on their debuts!
Playing with a full squad, the ladies gave 100% from start to finish!
Maddie Warren, our little chatty terrier at 9 got on the score sheet first! Her first try for the ladies at the tender age of 18, but our ‘old head/experienced player’ in our pack! Olivia Burnett played a stormer at 10, finding touch & knocking over conversions with ease, 4/5 to get points on the board!
They had a strong squad out, so the Tows ladies had to put in big tackles & be productive at the breakdown.
Mauls & Scrums went the Tows way & we hammered up the pitch gaining metres.
Back in their positions Amy Lovell & Gemma Smith in the centre fixed players in their channels, leaving Gemma 3 solid chances at the try line!
The HQ ladies fought hard & went over the line 4 times also. A bunch of very strong ball carriers gave the game a good match up for 80 mins.
Grace Tillen was a welcomed sight back in the team and wearing the Captain’s armband.
A fantastic attacking game gave Towcester Roses a win, 33-20!
Heidi Aris was awarded Back of the Match - fantastic game for her first outing on the wing! One to watch out for!
Sam Smith got Foward of the Match - brilliant in the second row, holding her own and having the bruises to show for it!
Coaches Couldn’t have asked for a better start to season in their first home game.
Share via
FacebookTwitter
https://www.pitchero.com/clubs
Recent news

Changing room 1 for our ladies. Please arrive with enough time to get strapped up and ready to do some run throughs!