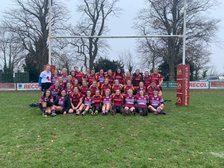 Today the Roses welcomed the Silhillian Sirens to Greens Norton road on what was set to be a cold snowy hard fought battle. The team sheet highlighting 3 players making their Roses debut, well done Robyn, Lily M and Emma.
Right from the off, the Sirens dazzled with their quick hands and fast feet to break through the Roses defensive line and score their first try under the sticks within 2 minutes of the game, making the conversion to take their lead to 0-7. The Roses took no further time settling into the game, making the Sirens play the Tows way - hard tackles and strong carries seen the Roses score their first try on the 10 minute mark. The strong winds and team defensive efforts from Sirens making the kicking difficult from the T. Sirens were next to score, slotting the conversion keeping their lead of 5-12.
Until now the Roses did not demonstrate their supreme strength as the scrums were called to be uncontested. After a few hard carries from Grace and Pat through the centre of their defence it became clear the type of game we needed to play. Sure enough two tries within quick succession brought the scoreline in favour of the roses at the 26 minute mark at 15-12. But, the Sirens being relentless in their defence and making use of their quick and skill full backs players pulling slightly ahead once more at 15-17. The response of the Roses was to score 2 more tries in quick succession drawing the score to a very respectable 25-17 lead at half time. With the forward pack dominating the breakdown and the backs defence resembling a brick wall, the Sirens looked to be all out of options.
As the temperature continued to drop and the snow started to fall all of the ladies battled on demonstrating the epitome of strength, resilience and team work to see the game over the line. The Roses being too much in the second half for the Sirens, dominating to score 4 more tries drawing the final score to a Roses home win of 39-17. A huge well done to all the ladies for their efforts today and a special mention to our Forward of the match (Tash), Back of the match (Darcy) and our opposition Player of the match (Pat).
Share via
FacebookTwitter
https://www.pitchero.com/clubs
Recent news