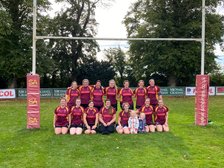 The Roses welcomed Bedford Blues Women to Tows today for our first fixture in over 18 months. Both teams comprising a host of new players, playing their first ever game! Yet, the standard of rugby on the field today, you wouldn’t have known!! A huge thank you for Wellingborough Women and Kelly Harry from Buckingham who joined us to make up the numbers for both teams for a full game of 12 vs 12.
The first 15 minutes of the game comprised of a strong attacking effort by the Roses, leading to Eloise opening the scoring at 11 minutes. Upon kick off, Bedford demonstrated strong defensive efforts to keep the Roses pinned in their own half until a through ball was chased well but ultimately touched down by Eloise, with Olivia Burnett converting to make the score 12-0 at the end of the first half.
Plenty of rotation was made by both teams and it was clear to see that the nerves were settled in the second half, with some excellent forwards play. Bedford kicked off the scoring of the half by making a clean run through the Tows defence and and scoring under the sticks to put the first points on the board for the visiting side, closely followed by another try for Tows as Eloise stormed under the posts for her third of the day.
As the half wore on both teams started to feel the impact of the 18 months away, until visiting player Kelly Harry made use of the new rugby rules and demonstrated excellent attacking play in kicking from the 50 to the 22 to secure an attacking line out! The resulting line out lead to some great hands across the backs before being ploughed across the line by Lucia and Nicola, for Nic’s first ever try for the Roses, converted well by Liv. The resulting kick off lead to a final burst of energy from the Towcester whippet, Eloise as she danced gracefully through the opposition defence before scoring her 4th and final try of the game. Final score 31-5 to the Towcester Roses. Excellent effort all round but a special mention to our new players Lily, Mia, Tayla, and Ellie who put on a shirt for the first time today; and to Mason our new pitch side support. Congratulations to today’s forward of the match: Nicola, back of the match: Eloise and opposition player: Maya.
Share via
FacebookTwitter
https://www.pitchero.com/clubs
Recent news