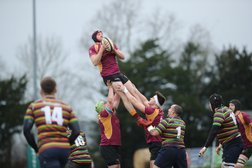 Tows looked to play phase rugby rather than use the elements, clearly in their favour in the first half, retaining possession and testing the robust Scouts defence for openings, eventually some smart play in the centre of the field gave Tows the opening score, good work by Dave Devlin-Jones to find a hole and then feed the onrushing Alex Chalcraft to go over under the posts, Chalcraft followed this up soon after with another try, finding himself in space after good work from the forwards, both tries converted by Matt Yuill to seemingly put Tows in control, but with no further scores in the half would a 14 - 0 lead be enough as Scouts turned round with the strong wind at their backs.

It didn't take long for Scouts, playing in a league level lower than Tows, to use the elements to create some pressure and score early in the second half through Tom Holliday, and then errors from Tows allowed Scouts to score another try from Emilio Giron-Walsh and with both converted the pressure was firmly on the home side with the scores level at 14 - 14

It was Tows who managed to raise their game though and produce the best move of the match, gathering a long kick ahead well inside his own half, replacement full-back James Falvey ran back, found some space and then released the quicker Alex Froggett on the wing to go in, Falvey adding the extras.

Managing to bring some control to the game Tows moved clear when no.8 Nicky Blackham charged off the back off a scrum to score under the posts, Falvey converting and veteran winger Matt Bodily finished the scoring by going over in the corner after evading several tackles. Tows will face Bugbrooke in the Semi-finals.

Elsewhere around the club Tows 3rds beat Olney 2nds 27 - 19 to reverse their only defeat of the season.