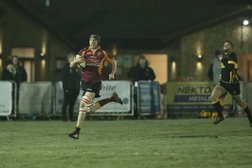 It was one of those nights where there should have been a lot more on the score sheet.

A very cold night at Greens Norton road with the fog lifting slowly leaving the ground starting to freeze over.
Visitor Casuals with a far larger set of forwards looked at this game as a chance to put one over on Tows.
From the kick off Towcester came straight out of the blocks putting lots of pressure on the visitors defence.
Lots of phases and a lot of defend didn't result in what would have been a justified early score.
It took an interception from a mistake from Lewis Barker, passing from a breakdown on the blindside of a ruck Craig Holton read the pass and ran 70 metres to score Tows only try of the game.
James Falvey added the extra 2 points from the conversion.
Both sides then spent the next 20 minutes trying to gain some sort of foot hold in the game.
Casuals infringing on numerous occasion finally lead to the ref awarding a penalty in front of the post.
James Falvey easily slotted the ball through the posts.
Half time and Tows lead 10 points to nil.
From the restart Tows didn't compete for the ball and the subsequent line out catch and drive lead to Casuals first points from the penalty adjudge for coming in at the side of the maul.
Eight minutes later after another round of pressure from Tows the visitors infringe conceding another penalty to the boot of Falvey.
Casuals weren't done as the had their own purple patch scoring a deserved try from constant pick and drives close to the try line.
With the score so close Tows took more points from another penalty.
The last five minutes could have gone the visitors way as Tows had to defend to the final whistle.
Another win and onto the next round.
Saturday back to league fixtures and a trip up the motorway to Derby
Share via
FacebookTwitter
https://www.pitchero.com/clubs
Recent news