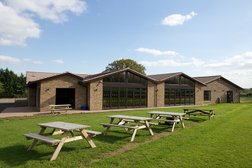 Over powered by a side that relies on the forward power to dominate to opposition.

This was a game that Towcestrians need to learn from.
Playing against heavier forwards needs a game plan that can move them around without getting into wrestling matches with the bigger players.
The game could have been entertaining but injuries every few minutes never let Tows get into any sign of the running rugby we like to see.
The first few minutes both side push to see the weakness in each others defence.
Lutterworth infringed first giving Rhys Williams the opportunity to put 3 points on the board.
From the restart an error in defence allow Lutterworth back in for an easy try wide on the wing. Unable to convert the home side trailed by 2 points.
Tows then had a purple patch. Constant pressure on the visitors line lead to a charge down of the Lutterworth's kicker and Ed Penn picking up to dot down to the left of the posts.
This was followed up minutes later when Adam Williamson found a hole through the middle of the defence scoring under the posts.
Rhys Williams added the extras as Tows lead by 10 points.
Lutterworth hit back immediately as they followed a minute later with a try of their own from another defensive error.
Buoy by the quick score the visitors finished the half with a score just on half time.
Trailing at half time a big team talk was required but it was the visitor that started the brightest.
The 2nd half was a half to forget.
It felt like the game would never get going with the visitors having an injury after every move.
The referee was struggling to keep pace with his own injury which lead to a scrappy display.
Lutterworth forwards never tired as they were never moved around the field .
If the game moved around for a few minute everyone recovered when the game stopped for a injury.
When the game did flow Tows showed that they can put on a display of good running rugby.
Alex Parker had the final say scoring just before full time.
These are the games we need to learn from to become smarter players and to deal with sides like Lutterworth.
Next week we are away at Olney who themselves lost this week
If you can get there to show your support.
Share via
FacebookTwitter
https://www.pitchero.com/clubs
Recent news