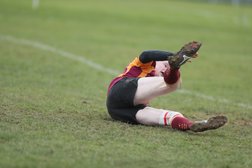 Win On The Road at Old Laurentians

Another fine day for our second league game of the season.
The team had a couple of changes from last week which gave debutante Jake Fellows a start at open-side and Ryan Blackwell starting on the bench as just reward for their outstanding performance for the 2nd team last week.
The first half start from Towcester was fast, Ali Haynes got onto the end of a good set of moves to score on 5 minutes , Rhys Williams added the extra points.
From then onward the game became quite scrappy. Injury to Dino Gallone with a bang to the knee was followed very quickly with another pair of Knee injuries to Peter Gowler. The game was stopped for a significant time to allow the big prop to be stretchered off the field.
The delay really hindered Tows dominance and the home side started to get back into the game.
After the restart the pressure from OL's paid off and they scored a try out wide. Unable to convert they trailed by 2 points.
Bouyed on by the home crowd the home side were awarded a penalty just before half time.
At the break OL's took the lead 8 - 7.
The team talk at half time seemed to work as from the kick off Tows secured the ball and made a good break moving the ball across the field to see Ronnie Speakman cross the line for the first points of the second half. Rhys added the additional points 8 - 14
Not to be outdone by his team mates this week , the next attacking move proved fruitful for Cameron young as he managed to out pace the covering defender.
The rest of the game then became very fragmented again as stoppages injuries to the opposition and the whistle of the ref never allowed the game to flow again.
This didn't help Tows with their game plan and the home side secured the final try to end the game 15 -21
Next week home to another side we haven't played for a while Leighton Buzzard
Share via
FacebookTwitter
https://www.pitchero.com/clubs
Recent news