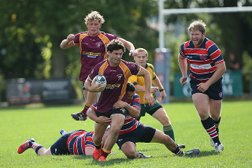 Towcestrians took the field at a packed Greens Norton Road looking to build on their strong start to the season against a powerful Grove team that had also claimed maximum points the previous week.

Towcester went behind early after conceding a penalty but struck back almost immediately, Callum Jones finishing off after some continuous Tows pressure, Scott Browne slotted the conversion for a 7 – 3 lead. Towcester backs continued where they left off the previous week looking dangerous in possession, however it was the Towcester forwards who scored next, Loose head Prop and Captain Zac Osborne making a habit of scoring for the third consecutive week, again converted by Browne.

After such a good start Towcester allowed themselves to get slowed down and the pace of the game dropped conceding a string of penalties leading to Joe Threlfall ending up in the bin for a ten minute rest, Tows problems were confounded early in the second half when their entire back row was injured in a bizarre incident which left two of the three requiring stitches to head wounds.

Hard work and application saw Tows gradually regain some control and Callum Jones crossed for his second try from a line out close to the visitors line. Grove, who have proved a tough game for Towcester over the last few seasons came back with a try of their own, the Left Winger crossing wide out and an excellent touchline conversion brought the scores closer at 19 -10, it was Towcester who responded though with Alex Chalcraft on the wing crossing to secure the bonus point and crossed again after the Tows forwards had driven the ball downfield, full back Pepe Nanci picking the ball up from the base of the ruck to dart over untouched, Grove had the last word with a try through their forwards for a final score of 29 -15 to the home side.

After the game Capatin Zac Osborne commented “It was a great performance against a physical and well organised side, with lots of positives to take in to next week’s away game at Salisbury”