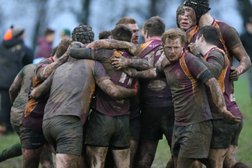 A packed Greens Norton road looked forward enthusiastically as Towcestrians faced their toughest task of the season so far against league rivals Salisbury, one of only two teams to have bested the Tows , the Wiltshire outfit sat just 3 points behind Towcestrians in second place and knew a victory of any kind would see them back at the top, while Tows had a great opportunity to create some breathing space in the Title race.

Towcestrians started well in cold, wet and very muddy conditions, using great hands to put winger Matt Yuill in for the opening try in the corner, unconverted to lead 5 – 0 early on, Salisbury found their feet and applied pressure in both the set piece and in the loose, indiscipline caused Tows to concede penalties and Salisbury kicked two to go ahead 5 – 6, Salisbury now looked to use their big runners and turned the screw, some dogged defence from Tows keeping them at bay but eventually the line was breached after Tows dropped off tackles to allow the Salisbury Winger in for a Try, a Penalty from James Falvey on the point of half-time brought to a close a cautious first half, 8 – 11, where Tows worked hard in defence more than trying to impose their own game plan, the boisterous traveling supporters thinking they were on their way to a victory.

Whatever First Team Coach Darren Snook said at half-time galvanised Tows into action, and they were keen to outline, despite the dismal conditions, exactly why they have scored 100 points more than their nearest rivals this season, fielding the kick off the ball moved down field through numerous phases and offloads, excellent recycling from both backs and forwards eventually resulting in the superb Murray Aitchison breaking from the 22 and then popping the ball up for no.10 Scott Browne to crash over under the sticks, an easy conversion followed to put Tows 15 – 11 up, Tows continued and produced the best move of the match, from a Midfield Scrum the ball moved down the back line with Browne looping to create an overlap fed Falvey through the hole, a quick inside pass to right Wing Chalcraft who then fed outside for left wing Yuill to score his second of the game and continue his excellent try scoring season, a difficult kick from near the touchline was easily dispatched by Falvey to extend Tows lead to 22 – 11 and silence the travelling support.

Salisbury came back with everything they had, Tows defensive effort not helped by the concession of numerous penalties, and despite taking territory Salisbury were held out and frustrated and eventually took the 3 points on offer to close the gap to 8 points, it was Towcester who had the last word though as the game drew to a close and Salisbury tiring it was the home side who gained ascendancy in the set piece and after a great break through the forwards, led by the excellent Liam Wilkinson and Craig Holton, Salisbury conceded a penalty on their own line, skipper Zac Osborne opted for the scrum and demanded one last effort from the Pack who obliged by shoving Salisbury backwards who collapsed under the pressure and the Referee ran under the posts to award a Penalty try for the Bonus point win, 29 – 14, the win takes Tows 8 points clear at the top of the league.

After the game, Snook had high praise for the squad “the guys did a terrific job, to play the way we played in those conditions takes skill but is also mentally demanding, to have to knock much bigger guys over time and again takes some attitude, we took a lot of stick from them when we lost down there and we used that as motivation, it’s a long way back down there when you’ve got nothing to show for it”

There is no let up for the Tows League program as they travel to local rivals Leighton Buzzard this coming Saturday.

With the 2nd XV game cancelled it was down to the 3rd’s to continue their winning ways with a solid away victory to Dunstablians 2nd XV, 17 - 27

Towcestrians also got national press coverage this past week, when the first team squad were joined in their final run through by England and Saracens Hooker (and Tows old boy) Jamie George, who had returned to Greens Norton Road for an interview in the Daily Telegraph, alongside his uncle, Tows Director of Rugby Robbie George, the England and Saracens Hooker explaining what motivates him and why Robbie has been a major influence, the full article can be read here:

Another big game at Towcestrians, this is a Top of the table clash.