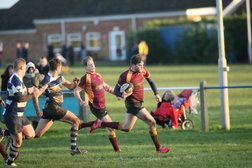 After last week’s high class performance Towcestrians came out on top this week away from home against local rivals Buzzard in a dour arm wrestle of a match, James Falvey was the star of the show scoring 14 of the Tows 19 points, including a try and three penalties

In slippy and testing conditions the scrummage became a lottery which the referee struggled to control, Penalties were exchanged before Tows showed some simple pressure play winning a penalty and from the lineout driving up the slope for Charlie Smith to score, it was only until the second half that the scoreboard ticked over again, a second James Falvey penalty opened the second half scoring for Tows who extended their lead to 3 – 11 but a yellow card for centre Ben Roe allowed Buzzard to exploit space for their right winger to score and bring them back to 6 – 11, again penalties were exchanged before the Towcestrians backs finally opened up the Buzzard defence and Falvey scored in the corner unable to convert his own try, for a 11 – 19 scoreline, despite Tows piling the pressure the game ended in chaos on the Buzzard line with no further scores

Towcestrians 2nd XV travelled to Leicester Lions for a 26 -7 victory and a combined 3rd/4th XV lost at home against Winslow, The Colts collected a win against regular rivals, Southam, 10 - 15