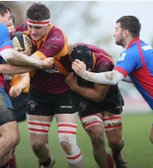 Tows hit the ground running in 2020

A converted try from the visiting side in the first minute was a cause for concern with a suspected festive hangover but Tows soon replied with a well worked backs move, James Falvey releasing Cam Young down the left touchline for him to dot down in the corner and Falvey added the extras. Oadby scored a similar try out wide through their captain. The hotly contested first half finished with a try by Adam Wilkinson showing decent pace and it was 12-14 at the break

The second half started much in Tows favour despite heavy forward pressure from Oadby. Cam Young scooted over for his second followed shortly by Pepe Nanci wriggling over and it was advantage Towcester at 24-14. The Leicester side made their forwards advantage pay with a series of tight pick and drives bringing the score to within three. Falvey kicked a penalty in response but shortly after Callum Jones was shown a yellow card after tows struggled in the scrummage. Oadby pushed a scrum over from five metres out to set up a tense finish at 27-26 after a surprising missed conversion.

Tows finished the game in style regaining the ball from the resulting kick off and working up the pitch. Ben Roe at 10 had several options outside him causing the defence to be spread wide and he showed strength to bust through the line and score himself. Falvey added the extras to take the losing bonus point away from the visitors who fought from minute 1 til the very last. The final score 34-26. A hotly contested match fortunately finishing on a different note to the return fixture earlier this season. Tows travel in to Northampton to face ON’s next Saturday in what is always a fiery affair.