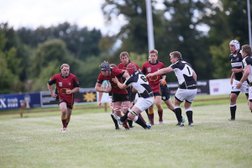 A GOOD BUT CLOSE START FOR TOWS

Tows kicked off the new season on Saturday into pastures new travelling to newly promoted Devizes. The conditions were perfect for a fast paced game of running rugby, as the VP crowd watched with anticipation.

The home side started the brighter as they held possession in the opening exchanges, however after twenty minutes of sparring Tows broke through as David Devlin-Jones opened his team’s account for the season, ghosting through the defence to score. James Falvey converted.
Celebrations were short lived however as the away team conceded a penalty straight away from kick-off. This allowed Devizes fly half Andy Thompson the chance to gain possession which he did expertly. This put his team in the perfect attacking position. A further penalty and drop goal bringing well into the game.
Luck then turned for Tows as they were awarded a penalty on half way. Surely too far for Falvey to think about the three points, the full back had other ideas, smashing the ball between the sticks on the stroke of half time. The home team lead 12 – 10.
Thompson dynamic performance continued into the second half as he added his second drop goal to stretch the hosts lead.
Tows then turned on the gas as scrum half Gus Hopewell crossed for the second try for the visitors levelling the scores.
The game was suddenly going Tows way, a driving maul brought down resulted in a yellow card for Devizes’ influential second row Lewis Paget. The shortage in numbers from the home team shortly began to show from the following scrum as Tows drove the scrum back and were rewarded with a penalty try.
Yet again the accurate boot of Thompson kept Devizes in the game, a converted penalty seeing the score at 18-22.
Tows replied again from the penalty with a lethal break from Devlin-Jones at the half way line who then found the determined Eugene Baxter in support to score the fourth and bonus point try. Falvey again adding the conversion.
Tows however were caught napping at the finish as Devises winger Wadman scored from a chip wide out.
A good start for Tows but still a lot of work to be done. Devizes can also take a lot of positives from the game.
Share via
FacebookTwitter
https://www.pitchero.com/clubs
Recent news

Those going to Devizes need to be here on time to catch the bus.