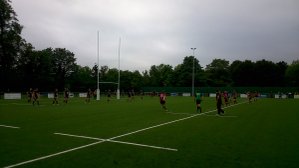 On Saturday Towcestrians travelled through the leafy Chiltons to take on newly relegated Maidenhead on their exemplary facilities which boasted an artificial pitch.

Tows knew they were in for a feisty encounter as the home team are looking to bounce straight back up into the National Leagues. The home sides familiarity with the surface showed in the opening exchanges as fly half Mike Virgo slotted a penalty.
Tows then decided to pick up the pace as they swiftly spread the ball to winger Dave Stocks who gave a neat pass to number eight George Symonds who crept over the line, Falvey continued his form from last week as his slotted the conversion.
Both sides looked to play an expansive game on the immaculate surface and it began to pay off for the home team, their nimble runners scoring to give Maidenhead a reasonable advantage. Virgo added the conversion and a further penalty so that the home team were 13-7 clear.
Maidenheads luck began to change however as poor discipline lead to a yellow card for their number eight. Consequently Tows forwards took the opportunity of the extra man by creating a huge amount of pressure to allow Fly half Ben Roe to crash over.
The half ended with a magnificent run from Towcestrians scrum half Gus Hopewell as he ghosted through the defence only to be stopped short of the line by some great cover tackling.
At the beginning of the second Tows continued their attacking rugby resulting in a score from Chrissie George who smashed over from short range, Falvey adding the afters.
As the game pressed on Tows domination in the scrum failed to satisfy the referee, the several penalties finally lead to Maidenhead number eight to crash over from a scrum.
The game then swung in the favour of Tows as they found themselves with a penalty in an extremely kickable position, Falvey Obliging.
Tows were then caught napping as a scrappy scrum lead to an important converted try to the first team which gave them the lead at 25-22 in this hotly contested see saw game.
Suddenly Tows burst back into life as the mounted a full scale assault on the home team’s line, a series of five metre scrums stopped just short by the desperate defence before Tows man of the match George Symonds burst through the tiring defence for Falvey to convert.
Maidenhead were not going to give up, throwing everything they had at the brutal Towcester defence. A scrum against the head from Tows allowed them to flamboyantly kick the ball into touch to win the game.
Share via
FacebookTwitter
https://www.pitchero.com/clubs
Recent news