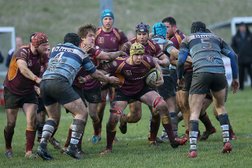 On Saturday Tows looked for some consistency in the season as they travelled to Newbury.

Tows started well dominating the early territory, the pressure told when Tom George charged down an attempted box kick to calmly pick up and score.
The lead was increased after a couple of penalties going against the home team, Kieran Frost going over in the corner.
The game was then turned on its head when experienced second row Chris Kirby received a yellow card.
Newbury sprang into action, fly half Richie West selling the dummy to score a converted try under the posts.
Kirby’s return saw him score Tows’ third. West then came back with a penalty to finish the half.
Tows’ second half did not go to plan at first, Falvey missing a penalty. Newbury then had a go and West converted well.
Falvey then had a second chance, of which he slotted after Blues conceded the second yellow of the game.
The game was in the balance, West showed great vision to place a pin point kick in the hands of Winger Futcher who scored in the corner to level the scores.
Tows forwards then new that they had to up the intensity, driving the ball into the Blues twenty two and after another yellow card the home team found it difficult to defend against Tows’ colossal line out drive. Replacement Callum Jones scoring the winning try which was converted by Falvey.

We now have a confirmed kick off time of 3:00pm.
If you are traveling to watch please allow 1 1/2 hours travel time.