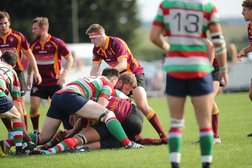 A Game of Two Differing Halves

The friendly away at Lutterworth provided an entertaining game right to the end.

A friendly away at Lutterworth whilst the first team played their final league game for this season .
The first half completely belonged to Towcester as their ball handling skills proved to be too much for the home team to handle,
Direct running from the forwards opened up gap for the backs to simply move the ball wide stretching the defence for Jordan Brew to get the first points of the day.
From the restart the home side were on the receiving side of a lucky bounce as the ball cleared the heads of four defenders and dropped into the hands of the home sides winger.
This buoyed the home side but Towcester struck again as Alan Chapman emerged from a series of pick and drives close to the uprights.
Next on the score sheet was Dylan Murphy as the defence became very compressed giving a large amount of space out wide.
Ryan Blackwell not wanting to be out done got one of his own not out wide but cutting back against the defence scoring just under the posts.
Just before the half ended the home side infringed just once to often and a yellow was shown.
The second half start well as David Armstrong broke the defence out pacing all his persuader's to score and convert his own try.
Then the tides turned and the home side started to score at will 3 converted tries followed each other and they looked as if they were going to score a lot more.
Towcester were fortunate as they managed to put together multiple phases and Richard Tustian crashed over for Towcesters last try of the game.
Hanging on for the last 1/4 eventually the home side scored again but time had run out and one point was the difference.
Share via
FacebookTwitter
https://www.pitchero.com/clubs
Recent news