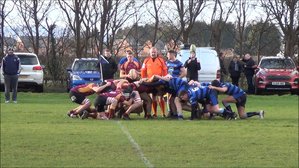 A fantastic show of defence from the visitors restricted the home side to only 2 tries.

A Cup and League double header away to Syston looked to be a very tough challenge for Towcester to face.
Syston are used to winning at home and winning by a large margin, so Tows defence was immense to hold them to only 2 scores.
The style of rugby the lads played was good enough for the home fans watching Syston vs Lichfield Nat 3 league match to spend most of the second half watch our game instead of theirs.
We always have a few simple game plan rules enjoy yourself when out there, concentrate on what you can do well and get back onto your feet to defend if you don't have the ball.
Tows playing the first half with the strong blustery wind couldn't use it to their advantage.
The home side's game plan was as to be expected with the large Syton pack taking the ball through the centre to get them on the front foot sucking in the defence to open up space out wide to give them the opportunity to run in tries.
The scrum and rolling maul seemed to be their favourite weapon for Syston to attack from.
The defence from Tows stood strong as the lads chopped attackers low taking away the size advantage.
It was this defence that lead to turn over ball and Tows first score.
Penalty kick was taken to touch and Ed Penn secure the ball and a maul ensued. The home side defend the maul and the gaps started to open up in the defence. Dave Williams crashed the first attack to the right of the post and as the forward loop round Kyle Gibbings crashed up the second phase, with the Syston forward's still making their way across the field Andrew Smith back against the flow of play find a weak shoulder to score just left of the posts.
James Ball added the conversion as Tows took the lead.
With an injury to Rob Russell returning forward Robert Sheppard took to the field earlier than he thought.
The defensive effort from Tows eventually made the home side infringe again lead the ref to reduce them to 14.
On the wrong side of the ref they continued to loose ground to Tows and eventually infringed within kick-able distance.
Being a double header points on the board are the main focus, Jame Ball stepped up and slotted the penalty to put Tows 10 points in front.
At the turn round Syston kicked off and a knock on from Tows gave the home side a scrum 20 metres out.
The moved the ball well and got to within 5 metres of the line.
Their big second row took the ball at pace and crashed over for their first point with a successful conversion that followed.
Tails up and momentum with the home side it was Tows that scored next.
Nice running and a final catch and give from Dave Williams put Patrick Pope though the hole in the defence to run in a well constructed try.
Rhys Williams added the extras and the 10 point lead again.
The home side didn't give up and eventual broke down the defence to score late into the game , but the game belonged to Towcester.
Systons final attack which to all looked like a possible try scoring run was smashed to touch by Tom May and Kyle Gibbings.
The win puts us through to the next stage of the cup and a step back up the league table.
Share via
FacebookTwitter
https://www.pitchero.com/clubs
Recent news