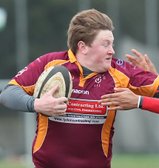 Last League of the Season

As is with all second team game its a different side every game.
This weekend we didn't gel as well as we could in some areas on the field.
Holes in our defence normally very good allowed Syston to step their way to a well deserved win.
Syston turned up with a smaller pack than normal and this became an area of dominance for Towcester as for the first time our scrums and line outs were always on the front foot.
Every scrum went backward but we never benefited from any of Systons indiscretions.
This went for the breakdowns as well every tackle ever time was messy and Syston played the ref well.
Our undoing in the end as we never played the rugby that we would normally play.

Next week we have a friendly at Lutterworth