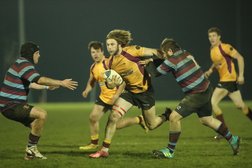 Another Campaign Over Until Next Year

Beaten by a bigger side on the day

What an entertain game of rugby to watch.
Two sides with completely different styles of rugby going full on for the 80 minutes.
Eventually the bigger side won on the night as the dominance at the set piece was Towcester's undoing.
The lads put up a valiant effort to over come the weight difference but every time the ball was spilt we gave the opposition field advantage as the penalties stacked up for the visitor to kick for territory.
We can only applauded the effort with so many ineligible players in the club that have won this competition or the Alliance Cup we dig deep and tap into up coming talent to give the young lads an opportunity to win some silverware.
What we need to remember is that this club has won 2 finals and made it to 2 semi finals in the last 4 years.
So onward and upward we still have the League Cup to play for and also the Alliance Cup.
Share via
FacebookTwitter
https://www.pitchero.com/clubs
Recent news