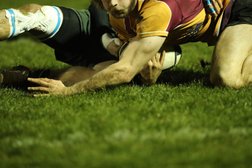 A great game of rugby played by two quality sides

Towcestrians welcomed Hinkley for the semi final of the reserve league for what turned out to be a great game to watch and be involved in.
The game started with a mistake from the start. The ball not travelling 5 metres handed over possession to the visitors, but Towceters scrum won the ball back and a quick attack resulted in Towcesters first points of the game. The conversion was successful from the boot of Ben Roe who's kicking was spot on all night.
For the next 30 minutes Hinkley pressed their attack.
Tows infringed on numerous occasions and Hinkley opted for kicks to touch hoping their catch and drive would secure them points.
Tows defence was resolute thwarting every attempt to cross the line.
Eventually Tows secured the ball and kicked to clear their lines.
Hinkley still pressed and they managed to force their way over the line for 5 points just before half time.
Team talk at half time was to play intelligent rugby in the right half of the field, clear our lines when under pressure and keep things simple.
From the restart Tows pressed into Hinkley's half making the visitors infringe at the breakdown.
Ben Roe stepped forward and pointed to the post. Second later 3 points.
It took another 10 minutes for the visitors to infringe again and Roe slotted another 3 points.
Not learning from their errors they infringed again and Roe punished them again.
Hinkley were now chasing the game and attack failed with error after error.
Neither side manged to score the try line and time ran out for the visitor. A great game of rugby and Tows through to the final on the 27th April at Sutton Coldfield to face league leaders Luctonians.
Share via
FacebookTwitter
https://www.pitchero.com/clubs
Recent news