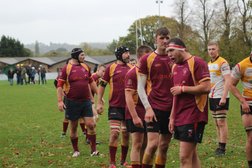 Development Team Get Stung by the Bees

Bimingham and Solihull bring a strong side to Greens Norton road .

The first 2 minutes of the game and the home side hadn't woken up and the visitor struck with straight running and power and intent.
The home side missed a few tackles as the opposition just ran hard scoring the first try to the left of the posts.
Thinking the worst, the home side rallied,from numerous attacks they defend well and didn't concede any more points.
With 5 colts joining the squad the young guys didn't look out of place considering the visitors were all bigger in most positions.
In the second half both sides put together numerous attacks but couldn't finish off any moves.
Just under ten minute in the visitor scored again with a nice move from their 13 evading tackles to open up a space for the following players to crash over the line.
Tows fought back and a direct line from David Devlin Jones bust straight through the defence to score in front of the posts.
James Ball added the extras and the tidies started to turn.
The next 10 minutes it was all Towcester but every move never came to that final decisive score.
In the final 1/4 both sides had opportunities and both defences held and no more points were added to anyone score.
Next week the development squad are away to Nuneaton
Share via
FacebookTwitter
https://www.pitchero.com/clubs
Recent news