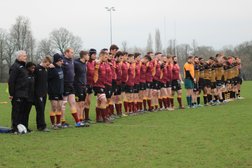 Short of Numbers but Managed a Win at Nuns

Players dropping out of the side didn't help with the trip to Nuneaton bu the guys dug in for a win.

Disappointing that players had dropped out over night and in the morning did help with pre match warm ups and the rejig of the squad before the game,
The Nuneaton side as most in this league boasted a large pack of forward that liked to run hard and straight.
In the first couple of minute what looked to be a clean steal at the ruck was deemed to be to late by the official giving Nuns the first 3 points of the match.
From the restart Towcester struck back , Hard running and nice off loads opened up the defence for Joe Threlfal to smash his way over in the corner. Ben Roe in a tough wind was unable to add the extras.
5 minutes later Nuns fell foul of the ref and Ben Roe added the points to the board.
This was the last play for Ben as a back spasm put paid to his day.
A re jig in the backs and Rob Bodily onto the wing it took a few minutes for Towcester to settle again and Nuns took advantage breaking through out wide and scoring the final points of the half.
The second half started similar to the first both sides probing and defences holding fast.
From a line out steal by Horatio Austin who was playing a blinding game tows surged forward ,multiple offloads between backs and forward found Harry Knibbs on the final pass to score wide again.
With no Ben Roe colt James Ball stepped forward and had a kick for the extras, Unfortunately the head wind was to strong for the ball to cross the upright.
From the restart Nuns piled on the pressure and 2 minutes later a Yellow for Rhys Williams on a team technicality 10 metres out increased the pressure on the defence. Nuns attacked and attacked and fortunately for Tows debutante Alex Bucknall sole the ball in a ruck to stop the attack.
Back up to a full team but lots of walking wounded Nuns eventually found a hole in the defence to draw level.
Unable to score any extra points the game was in the balance.
Tows attacked and moved the ball from one side of the field to the other making head way up the field.
As they entered the Nuns half he home sides influential No 6 infringed but this time getting caught by the official spent the final minutes off the field.
From the penalty Hozza climbed high at the lineout and the attack started 35 metres out. Sean Denton carried the ball straight and hard squeezing out vital metres. Knibbs and Bucknall carried the ball into centre midfield with Rob Russel and Luke Wilmott securing at the breakdown. Nuns defended well but infringed within kick able distance.
Up steps James Ball slightly closer than his previous kick just to the left of the posts.
Steps back a couple of strides then drills the ball through the middle.
With 5 minutes to play Nuns threw everything at Tows , but the defence stood strong and Axel Bucknall again stole the ball and surged up the field. Talking to the ref time had expired and the ball was punted off the field.
A courageous win for Tows with everyone stepping up to put in a winning performance.
Share via
FacebookTwitter
https://www.pitchero.com/clubs
Recent news