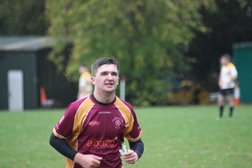 Pushed by Banbury To The Final Whistle

With guys playing Friday night for the first team the colts stepped up to fill the void.

Banbury's visit to Greens Norton road was everything we expected of them as they have started
to get the hang of this league with very impressive results so far.
Due to the lack of bodies again it was again a very changed squad from the previous week and not only did the colts turn up to fill the void but we had to call on an extra prop Sam Hughes form University Northampton to come along with Will Dendow but also Billy Jones at home for his parents 30th wedding anniversary to come along filling in at full back after a call from brother Callum Jones.
Our game plan for the season is again keep things simple, communicate and listen and work for each other.
Form the kick off Tows put Banbury straight under pressure.
The forward picked and drove through a couple of phases with Richard Tustain securing the first points of the game. Benjamin Roe converted the extras .
This ignited Banbury into attack. Their game plan as usual is the one out runner and smash it through the middle till they suck in the defence opening up space for the backs to attack.
The first score from a scrum went up the blindside singling out a 2 on 1 against the winger. scoring out wide they couldn't convert the extras.
The first half followed with Banbury sucking in the defence and the number out wide couldn't cope and the scored twice more in the half.
At the half time break Banbury lead by 8 points which Tows believed was still beatable.
A couple of changes at half time and straight from the kick off Banbury scored a very soft try.
Behind the posts the talk was still positive and to stick to the game plan.
From the kick off Tows crashed into the Banbury defence and over turned the ball. From the ensuing attack and an off load from Billy to Callum Jones , Tows were back onto the score board. Ben Roe again took the extra points.
Tails up and putting Banbury under constant pressure Tows started to see the rewards. Banbury falling foul of the ref had a man sent to the bin for 10 minutes and Tows punished them with another score.
Rhys Balfe playing his first senior game manage to get onto the end of numerous pick and drives from the forwards to punish Banbury previous indiscretion.
Banbury felling that they were under pressure and seeing the score come back towards Tows opted to kick penalties rather than the norm of kicking to touch extending the lead to more than two scores in front.
Tom Kibbs having a very controlled game at 9 grubber-ed the ball behind the defence for Dave Armstrong to out pace the wing scoring out wide.
With the game being so close either side in the last few minutes needed to keep hold of the ball and secure the wing.
Tows infringed and Banbury again kicked the penalty putting them 2 points back in front with seven minutes to go.
From the restart Banbury drove into the Tows 22 but the ball was stolen and Rob Russel made a bullocking run 30 metres up the field. With the defence all over the place holes started to appear. The ball was spun out into the centred and Dave Tilen made a break for the line . The Banbury defence came across and hit him very high a metre fro the try line. The referee had no other option to award a penalty and the lead back to Towcester.
The final play and the ball kicked to touch and a win for Tows.
Banbury made this a great game to watch as both sides came to play rugby.
Share via
FacebookTwitter
https://www.pitchero.com/clubs
Recent news