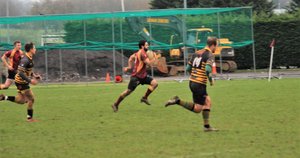 Derby turned up for the League double header with a big strong second team side looking to put Towcester to the sword.
From the kick off Tows were under substantial pressure and the big back line of Derby. With a few missed tackles Derby were straight on the scoreboard. Luckily the hadn't brought their kicking boots as the conversion was missed.
Minutes later the same moves from the backs and another round of missed tackles Derby opened up the defence again.
Tows did start to rally as they started to dominate the large Derby pack at scrum time. Numerous attacks were stopped with unnecessary offloads giving Derby momentum again.
Back on the score board again and only a 1/4 of the game gone.
It took a couple of big hits for Towcester to get back into the game.
Derby were under substantial pressure and from a well worked maul George Raven crashed over the line for Tows only score of the half.
Half time and Tows were 10 points behind but with their tails up .
From the restart Tows attacks started to make ground. Every scrum Towcesters smaller pack dominated . From a scrum Jack Wilson carried hard into the defence against and after a few phases found himself over the try line for Tows second score.
From the restart both sides work hard in the middle of the pitch , Jordan Brew carried hard all game and made metres into the defence but Derby's defence stayed strong wave after wave eventual tuning over the ball getting into the Tows 22.
Moments later and a great intercept Kyle Gibbins sprinted 70 metre to put Tows level with James Ball adding the extras.
For the last 9 minutes of the game either side could have score but Derby worked the ball to the posts and manage to get the ball down against a pad scoring the win.
This was a cracking game to watch and one of the fastest games all season.
Next week we are away at Hinkley.
Share via
FacebookTwitter
https://www.pitchero.com/clubs
Recent news