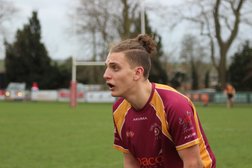 A Win On The Road

The first half started brightly for the visitors as the ball was moved from the kick off through multiple phases . Forward linked with the backs after some very strong runs from the skipper Zac Osborne and Sen Denton. As the gaps opened James Ball ended up on a nice overlap dotting down for the first score of the day. Converting his own try Tows lead by 7 in the first 5 minutes.
Both sides had a few attempts at breaking the defence but both sides tackled well.
!5 minutes into the match an Towcester have to replace their 9 through injury and a rejig of the back line with no backs on the bench proved to be interesting. Patch Griffith took to the wing as James Ball covered 9.
On the 22 minute mark Phil Culwick followed a busting run by the forwards and managed to juggle the ball over the line. Ball added the extras Tows 14 points up.
Another forced change for Tows saw Simon Tiernan on for Liam Wilkinson pulling up with a hammy strain.
Banbury did manage to get on the score board after a good run by their 8 .
The half ended with Tows starting to get back on top just before the half time interval.
At the break the plan was to use the wider channels and work Banbury's forwards around the park.
From the restart Tows got on the front foot and after lots of interplay again Sean Denton smashed his way over under the posts.
ball added the extras a Tows opened up another 14 point gap.
Banbury rallied and pressure the Tows line eventual forcing their way over the line. This was their last points of the game as their forward tired and the backs started to drop off tackles.
After lots more failed attacks finally Dan Forster found a gap and ran in a 30 metre try.
This was followed a few minutes later as Will Denbow broke through numerous tackle attempts for Tows 4th.
The final score of the match went to Ryan Blackwell playing out on the wing not wanting to run if the ball came his way. But a little bit of coaxing from the touchline he found his way under the posts James Ball converted the extras for the win.
Share via
FacebookTwitter
https://www.pitchero.com/clubs
Recent news