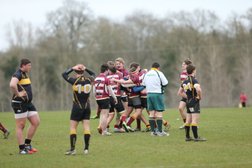 Tows Colts Through To Oceanic Final At Franklins Gardens

Towcestrians Colts hosted Northampton Casuals in the Oceanic semi finals on Saturday. The game was played in windy conditions and was fought out by two evenly matched sides. With the Casuals playing with the wind puting Tows on the back foot with some early pressure finally breaching the Tows Line when a missed tackle 5m out. Casuals also slotted the conversion to make it 0 v 7.

Towcestrians began to claw there way back into the match and had plenty of ball but could not manage to turn the chances into points by taking the wrong options.

With a couple of changes at half time and the wind behind them Towcestrian Colts began to dominate the game but they still could not breach the Casuals defense, finally with 20 minutes left a scrum to Tows on the Casuals 22 Tows secured quick ball and with the ball going through all the backs hands for James Snook to go over in the far corner, with Matt Hampson narrowly missing the conversion.

From the kick off Tows forwards secured the ball and with a series of pick and goes the pressure told on Casuals who gave a penalty away. Hampson kicked the ball into the Casuals 22 and from the resulting lineout a maul developed and Will Phelps went over the whitewash to secure a second Tows try.

Congratulations to all involved with Towcestrian Colts this season as they are now playing in the final at Franklins Gardens on the 14th April 6PM KO, and also on tour at the Gent Tournament early in April.