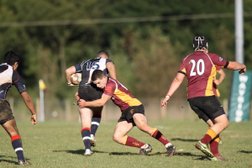 Bedford Blues arrived in Towcester in their traditional blues... but what would they leave behind for Tows?

The game started with a quick try by Bedford Blues in only the 3rd minute of play. 4 minutes later, Bedford repeated this feat, this time successfully converting as well to let the scoreboard show Tows as 12 points down.
11 minutes on the referee's watch, and a third quick try was created by Bedford. With the successful conversion, Tows looked like they were facing a cricket score - 11 minutes in and 19 points against them.
Luckily, Tows held their composure and steadied the game. for 15 minutes, the battle was even and then Thorne Gladwin darted through and put Tows first points on the scoreboard, with a try in the 26th minute of play. Sam Neale converted this into a further 2 points and the score looked more respectable with Tows on 7 and Bedford at 19. Tows relaxed a little too much and then let Bedford sneak in a try in the dying minutes of the first half, which Bedford successfully converted.
At the Half time whistle, the score was 7 - 26 in the favour of Bedford.

The second half seemed a more even game. Unfortunately, Bedford once again took the opportunities presented to them and scored a try 12 minutes into the second half.
Tows bit back and were rewarded with try themselves, with Sam Neale dotting down in the try area and then converting it as well. 14 - 31 and the game was not yet over...
Sadly, Bedford had not read the script and scored another try in the 69th minute of play and then managed to fend off any Tows attach until the final whistle - with the scoreboard showing a score not truly reflective of the Tows play... but sadly the record will show Tows 14 and Bedford 36.

Bedford Blues left with their shirts, but left the blues behind for Tows...