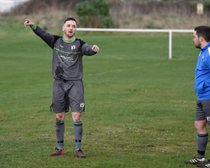 Meet the player is Joe Caven our recent signing from Bodedern fc in January
Joe has been a revelation since his arrival mainly playing at left back but has also put in a shift at centre back that won him a man of the match vs Nefyn when we was down on bodies.
Joe is Cup tied in the junior Cup so has missed the last few weeks so a few questions was needed to keep him occupied.

Age. 29
Support. Liverpool
Position. Left back or Centre back
Favourite current and past player. Current Robinson past Carragher
Previous clubs including juniors.Holyhead Hotspur, Trearddur Bay United, Aston Clinton, Kidlington, Valley, Gaerwen, Bodedern Athletic
Any football achievements? Represented RAF and armed forces at senior and u23s
Proudest moment in football? Winning my first caps for All Armed forces teams
Best player you have played with? A lad in the RAF with me who also played at Kidlington Lewis Brownhill locally Melv Mcguinnes
Toughest player to play against. Hal Robson kanu was different gravy coming back from injury for reading reserves
Are you any good at any other sport? I used to do a lot of long distance running in my younger days
Best finisher at Tbay Bulls? Iolo been scoring some big goals since I have been in so probably him so far
Quickest player? I'm in with a shout but I'd go for Dave webb
Least intelligent? Gwynfor by a country mile

tea of coffee. Coffee all day
PlayStation or XBox. PlayStation
Chinese or keebab. Chinese
Pint or coke after a game? Depending how much I have ran