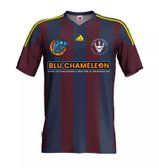 NEW KIT FOR THE NEW SEASON

THE CLUB WOULD LIKE TO THANK ROB AT BLU CHAMELEON FOR AGAIN HELPING THE CLUB OUT WITH THE MAIN KIT SPONSORSHIP.

Blu Chameleon have agreed to sponsor our new first team kit, this is the second time Rob has stepped in to help the club this year. He has already sponsored out women's team and has shown the club a great deal of generosity when he agreed to sponsor the first team kit. The players and committee are looking forward to seeing the new kit design in the flesh as it promises to be one of the best we have seen at the club.
Without people like Rob at Blu Chameleon it would be impossible to run the club and we would like to thank him yet again for his backing. Once the kit has arrived we will have Rob down with the lads to get some more pictures but here is a taster to show what a lovely kit it promises to be.
Share via
FacebookTwitter
https://www.pitchero.com/clubs
Recent news