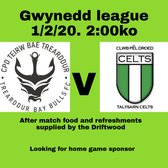 After talysarn took all 3 points a few weeks ago the Bulls had redemption on the cards.
45 mph winds at kick off the usual goal to goal was a huge factor
Bulls started well but Talysarn grew in confidence and was unlucky not to be in front bar a fantastic one on one save from konner druce, ( sponsored by wynne Evans), and a strike from Joe caven hitting the bar from 35 yards
Going in at half time 0-0 Talysarn Celts at this point as heard was verry confident coming out changing formation to clearly attack, but that's as far as they got, a tweak in a formation and the wind also died down sawthe Bulls push on and penned Talysarn in and played most the second 45 in their half.
Chances fel with with only one team pushing and a keeper twice handling outside the box staying on the field.
Justin Williams ( sponsored by Mon fire management) thought he'd won it but his shot hit the post rolling to safety

Bethesda next week in the league Cup at home