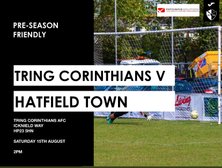 The Management team changed the formation and several players from Tuesday nights team.
With Jake M, Jake P, Dan R, Collins, Jack B and Dylan coming into the starting team.
Hatfield Town were a very well organised team as expected and the best team we have played against so far and looked very dangerous in the early stages but Tring scores early on when Justin swung in a deep cross to the back post that Dan R volleyed in.
Soon after this we was forced into a change with Rhys replacing Justin at the back.
The 2nd goal came when a defence splitting pass to Faulks who calmly finished across goal. Hatfield had their own chances when the forward headed high and a goal was disallowed for off side.

We started the 2nd half strong and then made several changes with Harry, Dan H and Calvino coming on and this soon paid off when Harry curled a well placed shot from the edge of the area into the far top corner.
The 4th goal came from a superb free kick in by Jake M which Calvino pounced on to strike home.

We finished the game strong and giving valuable minutes to all 18 players and young keeper Dan B playing 90 mins plus a clean sheet.