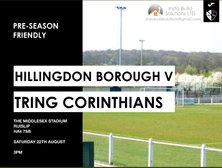 Tring keep on improving with back to back clean sheets

We travelled down to the Middlesex Stadium to play Spartan Div 1 team Hillingdon Borough.

Not knowing much about todays opposition we played with a very youthful team with only 3 players over 21 in the starting line up.
As expected the home side played with confidence until reaching the final third of the pitch and very rarely troubled our backline and birthday boy Dan playing in goal in front of his visiting parents.

Our first chance fell to Harry when Ben S picked him out with a pin point pass over the defence only for him to shoot straight at the keeper.
After 20 mins we had a forced change with Darrien replacing Ben in midfield and Rob dropping in to DM.

We continued to press hard whilst keeping our shape preventing the home team from pushing forward.

Soon into the second half we scored when the impressive young Dylan pounced on a loose ball to slam home high into the net.

We took the opportunity to freshen up the team with a few changes and this soon paid off when Harry picked up the ball wide of the area and drove to the line before hitting a cracking cross towards the six yard box which the defender diverted into his own net before the onrushing Dylan challenged.