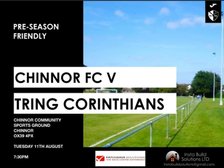 Comeback away at Chinnor

We travelled over to Chinnor to play Dan Daly’s young side and managed a 2-2 draw.

The home side started much brighter and looked sharp throughout the first 30 mins and deservedly took a 2-0 lead albeit we didn’t clear our lines very well and shape was not right.

We managed to pull a goal back before the half time break with a strike across goal from Ben S.

We made 4 changes at the half time interval and this made a massive difference and we got the equaliser when Harry challenged the keeper and he spilled the ball which Jake M pounced on to score after coming on.

The home team defended well and cleared very long as we continued to press for a winner but a last ditch tackle prevented Jake scoring a second goal for him and Ben blasting wide late on.