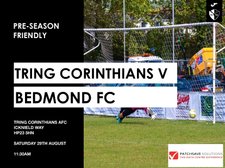 We welcomed local Bedmond FC to Icknield Way for the early kick off and around 30-40 spectators.

We rotated the squad and had a few senior players on the sidelines plus 4 trialist in the match day squad.
Also deciding to try a couple of different formations the starting 11 struggled to stamp their authority on the game. We had several chances from range and to be fair the away teams young 17 year old keeper had a great game plus they managed to get bodies behind the ball when not in possession.

During the half time break we decided to change the team up firstly going to a 3-5-2 formation with Ben, Toby and Rhys playing at the back and soon providing more quality from the back.
Rob, Jack and trialist in midfield giving more energy going forward.
The first good chance came when Ben climbed high to head down and somehow the keeper pulled off another good save to push the ball wide and then soon after punched away a free kick from the trialist forward but soon after we scored when the ball fell on the edge of the box and trialist smashed the ball home.
We made several more changes and comfortably see the game out without Dan having to make a save.