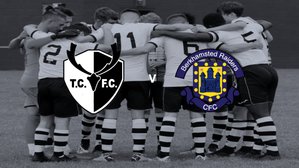 Bennetts at the double!

A tale of two windy halves.

The wind was blowing a gale and was always going to cause both teams trouble. Tring started going down the slope and caused the Raiders back-line trouble with balls being played down the side of the centre backs. Jake Millman was also causing problems for the Raiders with his pinpoint free-kicks.

Tring's first goal came when Jake Millman sent a delivery into the box which caused havoc and Toby Bennett smashed the ball in to the net at the back post. 1-0

Tring's second goal came when Jack Bradford played a delightful ball into the path of Harry Bennett who finished with a stunning lob of the keeper. 2-0

On 28 minutes Calvino Magnocavallo was adjudged to have brought down the Raiders winger on the edge of the box. A decision that left the Corinthian players bemused. No'10 stepped up and Dan Bobinski got down to his left and saved the resulting penalty.

The second half got off to the worst possible start, Raiders pulled one back immediately when the no' 9 curled a superb effort past Bobinski into the top left hand corner. No chance! 2-1

The second Raiders goal came from the spot. Ben Jenkins was adjudged to have tripped the Raiders forward which left everyone in the ground confused to why the penalty was awarded and the no'9 slotted home the resulting penalty. Very harsh on Corinthians who really didn't look like conceding a second. 2-2

The game filtered out towards the end. Jake Plumridge had a chance with a few minutes remaining but his shot was straight at the keeper.