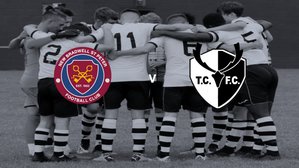 A third away loss in a row for Corinthians

Both sides came into this game on the back of away losses. It was a chance for the sides to put some points on the board. New Bradwell would eventually take all 3 points.

Corinthians lined up 442 for the first time this season looking to be more consolidated than in recent games. Tring started well, they were organised and New Bradwell found it difficult to break them down.

Corinthians made a habit of winning the ball from New Bradwell mistakes but were not clinical in attacking areas. New Bradwell could not find there way through directly or down the middle but were starting to get some success in wide areas. The wingers were "cheating' as they say while the centre forwards like to drop in but were having a hard time creating anything unless it went wide. This is where the first goal came on 32 minutes. The tricky number 7 and probably the big difference between the teams ran at Calvino Magnocavallo before entering the box and kind of scooped the ball into the left hand corner of the goal. 1-0

Once again Corinthians looked dangerous from set pieces and looking like they would cause problems every time the ball went into the New Bradwell 18 yard box. But on 44 minutes, New Bradwell won a free-kick just outside the area, centrally to the right. The number 11 stepped up and bent the free-kick around the wall and past Dan Bobinski. 2-0

There was chance for one last piece of action of the half. Corinthians were to get back in the game. A free-kick was delivered into the box, Dylan Langley headed the ball into the air and Toby Bennett acrobatically over head kicked the ball into the empty net. 2-1

The second half began and Corinthians management were relatively happy with the way Corinthians were playing, just needed to iron out a few areas of the pitch where improvement was needed. Unfortunately this did not happen and the 2nd half performance was not quite the same as the first. Corinthians conceded another goal on 68 minutes. A long ball from the right was met by the substitute striker who headed well past Dan Bobinski. No complaints about this goal. 3-1

Neither team looked like adding to their goal tally for the rest of the game as the heavens opened and summed up a disappointing away day for Corinthians.