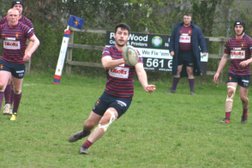 Congratulations to Elliott Culley who played his 100th game for the 1st XV on Saturday 13th April against Portsmouth in the semi-final of the Hampshire Bowl.

Elliott played his first game on the 12th September 2009 in the London Division 2 SW home league match against Guernsey and his 50th match against London Exiles on 22nd November 2014.