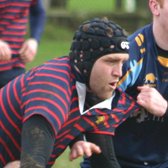 Congratulations to Neil Andrews on achieving 100 1st XV games against Old Georgians on 2nd April 2022.
Neil was the fourth player this season to achieve 100 1st team games but this one was special in that Neil took a total of 22 years to get there. He played his first game against Alton on 2nd September 2000 but suffered a number of serious injuries which restricted 1st team games for 10 years until his playing career restarted in 2014 with his 50th game played against Eastleigh on 2nd January 2016.
Share via
FacebookTwitter
https://www.pitchero.com/clubs
Recent news