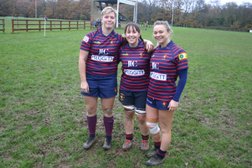 The Ladies match against Hove on Sunday 24th November, which was won 10 – 5, saw a celebration of great playing service to the Club when Hannah Kemish played her 100th game, Donna Rose played in her 151st game and Marie Leather played her 200th!

Hannah joins the select few ladies at Trojans to become a centurion. It is a fantastic achievement for a member of the ladies section to reach the milestone of 100 games for the 1st XV. She played her first game in the 17 – 5 win against the Royal Navy on the 6th March 2013 and has made the scrum-half position hers ever since. She has represented, and Captained, Hampshire Women.

Achieving 100 1st team appearances is great but achieving 200 is exceptional but that’s what Marie Leather did on Sunday, only the second Trojan lady to achieve such a feat. Marie played her first game, at hooker, against the Army on 2nd November 2005 and her 100th against Aylesford Bulls on 21st October 2012. Since then she has become an effective, and destructive, flanker. She Captained Trojans Ladies from 2009 to 2013 and gained Hampshire representative honours.

And in between, Donna clocked up her 150th match. She started in 2009 in a game against Supermarine (when she scored 3 tries) and played her 100th game against Rosslyn Park on 24/01/16 and, as Captain, scored 4 tries in the 60 - 5 win. She has represented, and Captained, Hampshire Women, London Division and the England Academy.

To add to the celebrations, congratulations must go to Rose Brown on her inclusion in the England Under 18 Girls squad. Rose graduated to the Ladies 1st team last season and she also played for Hampshire Women. Well done Rose and best of luck!