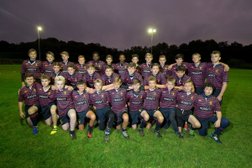 Last minute try takes Warriors to top of the league

After offering to rearrange the scheduled league game two weeks ago due to Fareham not having enough players this win was needed and deserved.

This time Fareham brought 19 players and looked stronger and bigger than before. I said to the boys at the begining as I always do I don't care about the result as long as everyone puts in 110%. I also informed the boys that the Ref had informed me after the last game he was not accepting any high tackles and we agreed that if there was he would ask both coaches to make tacticle subs of the offending players.

The game started simialr tot he friendly 2 weeks previous with Fareham kicking to us and Mark receiving the ball but this time he ran 40 meters but was cut down pretty quick and did not score. We continued to gain ground but Fareham hit us on the attack but Dara (No15) made a great tackle and we won the ball. We were then back in Farehams half and camped on their 5 meter line where we were given a scrum. all Season our forwards worked hard on their srums and their lineouts and these became good places to attack from. So 5 meters from the Fareham line and there was only one option Ed! with us winning the hook it got to Ed (No 8) feet and he did what he does best, he picked up the ball and ran at the Fareham defenders and was able to get over the line with 4 or 5 of them hanging off him. Unfortuantly Lucas was not able to convert the points but it was 10 minutes in and Trojans were winning 5-0. This seemed to spur on fareham and only 5 minutes later they hit us with an attack from their 8 and they were able to cross the line to make it 5 - 5. Our boys looked a bit shellshocked and were not playing to their full capability but some boys were putting in 110% while others walked and coasted on the pitch. unfortuantly only a few minutes later we made a high tackle and as promised the ref asked me to give our player a rest! With all 5 subs being new payers with less than 30 minutes playing time between them all and 2 of them playing their first ever club game I had to put some backs in the scrum and play one of the "newbies" in the backs.Virtually straight after this sub Fareham hit us with their 8 and 1 (Hampshire player) and then they were able to cros the line with the forwards working well to score their second try. half time came and it was 5-10 to Fareham.

During my half time talk I explained to the boys they were not all working hard and they were better than this and they were letting their mates down. The boys agreed and were pumped when going back for the second half. I brought on more subs and moved a couple players around to different positions so everyoen got a run out.

Straight away in the second half more high tackles this time from Fareham and more "tacticle" subs were made. Then 7 minutes in a great and brutal run by Farehams prop who an half the length of the pitch ahnding off anyone in his way and scored a cracking solo try and well deserved too. Unfortuantly during this he was injured and left the pitch. Now Trojans were 5 - 15 down and still with 20 minutes to go. However the boys did not give up and again some great runs from our backs and our forwards were imense in both their scrums and lineout drills and with Sammy Nadgie running the calls at the lineout and taking the throw ins we looked awesome. 2 minutes later we had a 5 scrum 5 meters from Farehams line and once again it was the Ed show! Ed did what he does best and picked and go and was able to score his second try and closer to the posts to give Lucas a chance. Lucas grabbed this chance and slotted the points away. Now with 20 minutes to go in the second half it was 12 - 15 and i knew it was going to be a close finish. Now with all bar one of the newbies on the pitch 4 out of our backs were all newbies. A few minutes later a great 20 meter run from Mathew (Debut game) took him over the line but only to knock the ball on as he was being tackled. He had worked hard since he was on the pitch and deserved a debut try, but today was not going to be the day. Mark made another good run down the wing but was pushed into touch only 7 meters from the line. It was now getting very nervy and I did wonder if this was going to be our day or not and then after making tackle after tackle all game Lucas (10) took a hard knock and was walked off the pitch by the first aider. During this break I was able to "encourage" the boys that the game was not lost and that we were better than what we had been playing. So I had to adjust the backs a bit as we had lost our 10, our kicker and one of our main tacklers. So Ollie J went 10 and I asked Louis (Prop) to be our kicker. Louis has great feet and hands and has a bloody good kick too so all our free kicks and penalties were now down to Louis. Time was ticking and with more great runs and tackles from Louis spured the boys on and with all 5 newbie subs filled my backs. With only a minute or two left on the clock we had another scrum approx 7meters from their line and we all knew the drill but so did Fareham! Ed made a great run but they teamed up on him and stopped him before the line, however lucky for us Gabe was close by and picked up the ball and got it over the line to score and make it 17 - 15. Unfortuanly Dara was unable to convert and this left the clock with less than a minute on the clock. Fareham kicked off and with a couple of plays the whistle went and we had done it. Trojans Warriors 17 Fareham Heatherns 15 once again a very tight match and some poor discipline on both sides but some well worked set pieces and some good leadership from some of the boys especially Ollie J, Sammy Nadgie, Aflie T, Lucas and Brad to name but a few.

This development team are now really gelling and working for each other. Still plenty to work on but some great work by most and some great potential from Taylor, Mathew, Tom, William B nd Jay who have all now played a part in a good win to take the Warriors top of their league.

Well done lads I bet it was a good game to watch but a nervous as hell one to coach!

Man Of the Match
Ed

Off for a pint

Please meet at 0845h for an early 1000h kick in the rescheduled league clash against Fareham Heathens.
Bring towel for showers and No.1's to change into for a meal with the Fareham players after the game.i