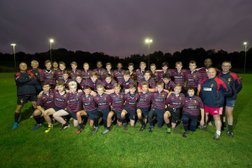 With both Trojans Warriors and Butser Baa Baa's joint at the top of their league and both playing on the last day of 2016 we knew we had to win this game and win it well.
At the start Milbrrok were only able to field 14 players so we of course matched their numbers.

We started off well with Tommy (just returning after a short time off rugby) ran at Milbrook from well inside his half and ran at pace. He fended off a couple of tackles and was just too strong for them and 2 mins in we were 7-0 up as Dara slotted home his first conversion. Only 4 mins later Ed made a good run and was able to go score between the posts and again Dara was able to convert 14-0 with 6 mins gone! A great start just as we wanted and deserved. 4 mins later Oli Jarvis wanted a piece of the action and after some good runs he was able to break through and score and again Dara was able to convert. 21-0 and only 10 mins gone. With lots of subs wanted to get on we swapped a few players around and got some subs on. 2 mins later Ed had another strong run and was able to score his second of the day and yep once again Dara was able to convert. 28-0 with 12 mins gone. Then it was William Fitzgeralds turn. He had only just come on and made a great run down the wing scoring in the corner. This time it was simply to much for Dara who missed his first of the day. However halfway through the first half and it was 33-0 so with th score running away I made more changes and brought off more players to give more subs a good run. With only 5 mins left of the first half Tommy got the ball again and ran at the defence and again was too strong for them and finished the game off with a great try and again was converted by Dara. So with 5 mins to go the score was now 40-0 and then game was called. Now it was a friendly and the half time whistle went.
So with the game won it was all about the boys getting as much game time as possible.
Second half kicked off and Milbrook was stunned with in the first minute with a great well earned try by Sam Page. When this prop has the ball in his hands he runs like a back and when he does not he runs like a prop....but this try was a great one and well deserved and once again Dara was able to slot another conversation his 6th of the game! The score did not matter now as everyone was playing and enjoying the game. The boys were passing the ball around well and working for each other. 6 mins I tot he second half William had another great run and was able to score his second of the game. William over the past few weeks has shown a massive improvement in his game and the way he approached training and was always very keen to get on the pitch and today this showed and both tries were well worked and he worked hard for them. Keen as ever and it is a pleasure to see how he has grown into a good rugby player. Milbrook were unlucky to score a well worked try by their player of the match No 14 as he dropped the ball on the line but it was not long and they managed to get a well deserved try. One of their second row went off with an injury so we gave them Ed, by far our best player and probably the strongest runner and most powerful players on the pitch. To say the rest of my team did not appreciate this was an understatement as I had plenty of players to choose from and I choose Ed! It was a choir of groans from the T's when they saw Ed going to play for Milbrook but he did well for them and made some strong runs. 2 mins later Milbrook crossed the line again to get another well deserved try.
4 mins to go and Gabe decided he wanted a piece of the action and was able to have a good run and cross the line to finish the game off 57-10

A great performance by all of the players but especially Will Fitz and Josh Simmons. But also Dara with his boot, kicking 6/9 conversions. Some great hooking by Matteo and good runs and hands by Louis. It was great to have Tommy back and to see the newbies Jamie, Robbie, Jay, Josh and William B all fitting in well with the squad. Also great runs by Tom and good to see him back after a few weeks out with a injured ankle. Good maturity and captaincy by Alfie T with support from Sammy Nadgie and Bradley.

A special mention to the Milbrook boys who never gave up and finished the game with a smile on their faces. They are a credit to their coaches, club and parents and their team spirit shone throughout the entire game and afterwards too. A good bunch of lads who will do well in the future.

A great early Christmas present for us all and this leaves both Trojans Warriors and Butser topping their league and gives Hants RFU a little headache to see who goes up.

Whatever happens we (coaching team) go into the Christmas break very proud and very excited of what we are going to see in 2017.

Well done boys you have done your coaches, parents and club proud and most importantly yourselves.

Keep up the good work, good team spirit and keep playing for each other!

Most of all keep enjoying your rugby!

Please meet at 0915h for a 1030h kick off.
Please bring towel for showers and No.1's to change into for a meal with the Millbrook players after the game.