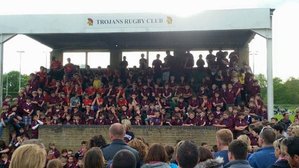 Despite typical rugby conditions (very wet and muddy) the boys pulled out a solid convincing win over US Portsmouth. There was some great work with the forwards competing well within the ruck and mauls even against a better drilled set of forwards. The backs look good at times and passed the ball well in terrible conditions. All linked together by the man of the match Mattis playing his first full game as a scrum half. He made some darting runs from the back of the scrum and scored a great typical scrum half try from 7 meters from our own scrum. There were also some great tries from Sam Dixon (2), Joe Bull, the captain Oli Jarvis, Bradley Gould and with a fantastic 80 meter run from one of our biggest and fastest forwards Tommy Pilcher that was set up by Bradley diving on a loose ball which allowed Tommy to run Forest Gump style to the other end of the pitch with some great support from the backs who even they struggled to keep up with him.
This was one of the best games I have had the pleasure to coach the Blue squad and this is one of their biggest victories since coaching them 7 years ago.
We started the day saying the three T's will win this game Teamwork, Tackles and Tries and they all,were in abundance in this game.
The whole team played their heart out and left nothing behind and I am very proud of them all. They just showed that they do work well as a team and there are no star players in our squad just great team spirit.

Our reward for winning this game is a away fixture on the Isle of Wight against Vectis on the 25th January which will be a very hard and though match. However with the same team spirit and determination I know we will be able to compete and push them to the end.
Well done from the blue coaching team to all the players as everyone one of you should be very proud.

Food will be supplied afterwards so please ensure you bring Club tie, white shirt, black trousers & shoes for lunch with US Portsmouth after the game.