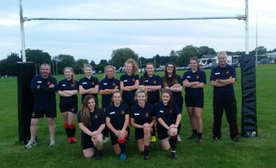 The coaches would all like to send a huge thank you to Victoria Lipscomb, Courtney Hegarty, Beth Wilcock, Aoife Datson, Chloe Ralph, Ella Vickers and Ellie Scudder for playing some fantastic rugby and showing great sportsmanship.

5 teams were entered into the 7's style festival last Sunday consisting of:

Trojans had a squad of 7 so it was going to be a tough afternoon for our players without any substitutes available and the warm up include a very quick lesson in how to play 7's as some of the squad had not had a chance to play this format before. Each match lasted 10 minutes over half a pitch.

First up for Trojans were Guernsey who opened the scoring after the first minute while our girls were still getting used to the idea of working the space with only 7 players. Soon after though, the ball made it out to Victoria on the wing who made a great run before offloading to Ellie to run in for our first try. After the restart, Trojans won a penalty so captain Beth took a quick tap-and-go and ran through the Guernsey defence to score. Guernsey scored next with a run down the wing again exposing our lack of width in this first game but the girls were learning quickly. With the try count equal our scrum of Aoife, Courtney and Ella, already dominant, came into their own allowing Courtney to pick up from a scrum and score just before the final whistle.
Final score Trojans 3 - Guernsey 2 and Trojans first ever U18's sevens team had started with a win.

Next up were the BaaBaa's after a 10 minute rest and this proved to be a sterner test for the Trojans team. Beth started the scoring this time with great support running down the blind side of a scrum but the BaaBaas hit straight back with 3 tries of their own - one round the wing again and the next two managing to cut through our defence in the middle of the field. With the score now at 1-3 to BaaBaas the Trojans girls woke up. After the last try, Chloe received the ball from the restart and made a great run to score to get us back in the game. The scrum were dominant again giving us good ball from another knock on and after a great passage of play ending in Trojans penalty Beth scored after another tap-and-go. Final score 3-3.

There was to be no rest for the team this time as the next two games were back to back with Basingstoke Warriors the next opposition. The Warriors took the kick off and sent the ball straight to Beth who ran through their lines to score a quick first try. The team were really learning fast now and playing well, looking for space and supporting each other. The next try though came from a maul following a scrum and Courtney managed to fight her way through to score. There followed a fantastic period of pressure from Trojans, not giving Basingstoke any time on the ball which resulted in Beth pouncing to pick up the ball and score for her second of the game. Basingstoke managed to pull themselves together after that and went on to score their only try of the game. This gave the Trojans girls the energy to stop any more and Beth went on to score two more to add to her tally, one straight from the kick off and one after a great passage of support play and pressure. Final score Trojans 5 - Basingstoke Warriors 1.

The girls were then straight into the next game against Basingstoke's other team - the Chiefs and although the Trojans suffered a heavy defeat, after 3 great games the girls never gave up but lost out to a far stronger team which was a brilliant effort by the Trojans girls as they had no substitutes throughout the festival.

The coaches would all like to send a huge thank you to Victoria Lipscomb, Courtney Hegarty, Beth Wilcock, Aoife Datson, Chloe Ralph, Ella Vickers and Ellie Scudder for playing some fantastic rugby and showing great sportsmanship. Playing in their first 7's tournament was a steep learning curve but they really improved game after game with 4 of the seven players scoring tries (Chloe, Ellie, Courtney & Beth) and a great scrummaging performance by Aoife, Courtney and Ella in all four games.