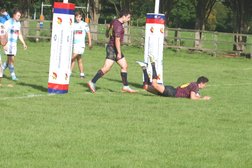 A good start to the season

In a stop- start game Trojans recorded a 4 try bonus point victory against a powerful hardworking Warlingham XV. Trojans opened the scoring very early through a Chris Boyd try following up on a break from the impressive Elliot Culley. This was followed by Toogi Long scoring just before half time. Trojans had to work hard for their win and defended for long periods of the game. Trojans extended their lead through a Josh Bowker try before Toogi Long got his second to round off the scoring. All in all an entertaining game that has given Trojans a platform to build on in the coming weeks at Training. Next week they travel to near neighbour New Milton for what will be a real test after their resounding victory away versus Basingstoke.

Head coach Rudi Kochanowski commented 'when we kept the ball we looked dangerous in attack, we've been working really hard on our defensive organisation throughout the summer and it was great to see that in effect today. As a coach you can't ask for more than a bonus point victory on the opening day of the season but next week will be a real challenge'