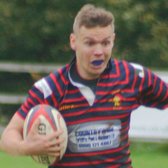 A Battling display at Battersea

Trojans Captain, Joby Kochanowski, felt it was a good day at the office playing his 200th 1st team game for Trojans, scoring a try in the first three minutes and coming away with a strong bonus point win in an exciting match at Battersea.

From kick-off, Trojans stormed the Battersea 22 and from a 5 metre scrum Kochanowski received the ball and dived over to open the scoring. Battersea mounted some strong attacks but the Trojans defence held them out until Battersea kicked a penalty. On ten minutes Trojans were on the attack and a quick penalty in the Battersea 22 was spun out for Alex Williams to crash over. Soon after, Trojans had the opportunity to increase their lead with a good backs move creating a clear two man overlap near the line but the ball carrier cut inside and was caught. On 25 minutes Battersea were in the Trojans 22 but Trojans turned the ball over and a scintillating run down the touch line by winger Tom Stevenson was stopped just short of the Battersea line and from the ensuing scrum Ben Fontaine crossed the line for an easier Toogi Long conversion. For the last ten minutes of the half Battersea put in some strong attacks and gained a brace of tries, the first from a clear mix-up at the back of a Trojans scrum.

The second half started strongly for Trojans and another try was achieved in the first two minutes with Toogi Long cutting his way through. Soon afterwards Battersea had a strong run down the left wing resulting in a try in the corner with an excellent long range conversion in a strong wind but Trojans hit straight back with interplay between the forwards and backs resulting in Jack Groves crashing through to score. Trojans had to withstand a long period of Battersea attacks but the defence were up to it and eventually broke out and advanced to the Battersea half where Dave Linton claimed the touch-down within a rolling maul to ease the pressure for Trojans. Battersea stayed strong to the end and gained a try in the dying minutes.