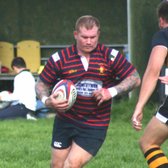 A great effort just failing to topple the league leaders

Trojans had a great opportunity to lower the colours of London 3 SW unbeaten leaders, Old Emanuel, at Stoneham having led, at one stage by 15 points, for the whole game until falling at the very last fence.

In the first ten minutes the opening exchanges showed what was to come in an exciting and tense game. Trojans opened the scoring when a classic Trojans move ended with back row Dave Linton, playing his 200th 1st team game, crashing over the line with a conversion by Chris Boyd. On the quarter hour an Old Emanuel attack resulted in then gaining a penalty. From the kick-off Trojans winger Pooley grabbed the ball and made good progress into the Old Emanuel half and the attack continued over the line but the ball decreed “held up”. From the ensuing scrum, Linton picked up at the back and dived over the line for his second try and another conversion by Boyd. Play continued to flow from end to end and Trojans gained a Boyd penalty from one of the attacks. With five minutes to go a flowing backs move by Old Emanuel resulted in a try for their winger, with a long range conversion into the wind, closing the half-time gap to 17 – 10.

Old Emanuel kicked-off the second half. Alex Williams caught the ball and charged into the opposition half and a few passes ended with Captain Joby Kochanowski, dropping a goal. From the kick-off an incident saw the Old Emanuel second row sin binned and from the penalty and line-out the ball went quickly to centre Ben Fontaine who darted through to score with the conversion only just going wide. This gave Trojans a 15 point lead and things were looking quite comfortable despite the hectic nature of the game. However, Trojans began to make some silly little mistakes and giving away too many penalties of which Old Emanuel took advantage and, despite strong Trojans defence, added to the scoreboard with a well worked goal and a try. With a 3 point lead to Trojans, the last ten minutes was very tense with Old Emanuel very much on the offensive but it looked as though Trojans would hold out for a great win until, with seconds to go, a 5 metre penalty to Old Emanuel saw them push over the line with a fifteen man maul to snatch victory and leave Trojans with just a disappointing one point losing bonus point.