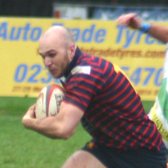 Basingstoke’s results to date indicated a clear win for Trojans was on the cards at Basingstoke and, indeed, it was but a Basingstoke purple patch in the second half gave them three tries and showed that they will have more to offer this season.

In the first ten minutes, Basingstoke had the better of the play but after one close attack Trojans winger Tom Stevenson put in a long kick which put his side into the Basingstoke 22 and from the ensuing play flanker Jack Groves bundled his way over the line with Toogi Long’s conversion only just going wide. On the quarter hour Basingstoke were on the attack but some excellent defence kept them out and a long defensive kick went to touch on the Basingstoke 5 metre line. Alex Williams took a clean ball and Mark Greenhalgh claimed the touch down from the resulting maul. Five minutes later another Basingstoke attack was thwarted and a darting run by Long put Trojans back into the Basingstoke 22 from where a Trojans scrum pushed towards the line, was collapsed by Basingstoke and the referee awarded a penalty try. Soon after some good Trojans open play ended with Groves scoring his second try with Long converting. On the half hour another Trojans attack was stopped just short of the line and some confusion in the Basingstoke defence allowed Sam Semple to grab the ball and dive over the line to give Trojans a 29 – 0 half-time lead.

Some Trojans loose play at the start of the second half allowed Basingstoke to threaten the Trojans line but the defence held firm and Trojans made their way towards the Basingstoke 22. A poor defensive kick was caught by Williams who charged unopposed over the Basingstoke line with a conversion by Tom Stevenson. The Basingstoke kick-off went long and from the half-way scrum the ball was spun out to winger Stevenson who sped down the wing and, although almost caught on the line, managed to scramble over in the corner. From the kick-off some unusually slack Trojans defence and open running from Basingstoke gave them a try in the corner which was warmly welcomed by the Basingstoke crowd. That Basingstoke try put a spark in their side and on 20 minutes some good open play put Trojans on the back foot and they gained another try. For the next ten minutes Trojans seemed to rather fall apart with some poor defence and poor decision making allowed Basingstoke to run in another well worked try followed on the half-hour with another which was converted. This made Trojans get their act together again and some good play put them into an attacking position resulting in Williams charging over for his second try, converted by Stevenson. At the close of the half, Basingstoke got into the Trojans 22, won a 5 metre line-out and ran round the back to score their forth try and their first bonus point of the season. Overall, a convincing result for Trojans but signs that, perhaps, Basingstoke are beginning to rise from their slumber.